Every now and then I get the desire to go to Canada, overnight. Really I would like to visit for at least a week, but ironically, the two times I have gone were overnight trips. The first time, the group I was traveling with, drove from Island Lake, Wisconsin, to Thunder Bay. The second time, my newlywed husband and I drove from Sevierville, Tennessee to Ontario, to see Niagara Falls.

I don’t care who you are, sometimes you need a crazy adventure to spice up your life. I consider the length of drive to Canada, overnight, to be quite the adrenaline rush. When you know you only have so many hours to explore a place, you plan your time wisely and you do as many things as possible.

Granted on my first trip to Canada I didn’t see much. We went to dinner and then I went to bed. The entire ride up to Thunder Bay I had been in the sun, in the backseat of the car. I felt awful. So the people I traveled with had a blast, but I missed pretty much everything. One fun thing did come out of that trip; we met a couple of crazy Canadians who frequented the same festival as us each year. That following summer they were camped out two sites away from our group.

The second trip to Canada was part of Neal’s and my honeymoon. We had a blast. We took advantage of a Groupon that gave us a whirlpool suite within walking distance of Niagara Falls. Our package included a chocolate factory tour, as well as a wine tasting package at Diamond Estates winery, which Dan Aykroyd is partial owner of. We also received vouchers for several different restaurants in the area, which made choosing food a bit difficult.

While in Ontario we walked up the street, through the tourist zone, to Niagara Falls. We got to take tons of daylight pictures. We saw a street performer, who was singing Johnny Cash music. We took some time to just feel the spray off of the falls, which was a pretty neat experience, considering how far away the falls are.

When you visit Niagara, you can take a tour of the falls via boat. There were tons of people on boats that were shuttling back and forth between the falls. Everyone on these boats had rain coats to keep them dry. I personally enjoyed just watching the boats and people, from a distance.

After we’d had our fill of the falls in daylight, we decided to head back to our hotel for a little downtime. I needed to take in one of my favorite travel perks, the whirlpool. We made sure to ask the front desk attendant what time the falls would be lit up so that we could go back and get night photos. Unfortunately, we were sadly misinformed.

I was under the impression, as was the front desk attendant that the falls would be lit up all night long. That was not the case. When we arrived back at the falls, they were no longer lit up except for a couple of small spotlights. We were very disappointed that we had missed out on one of the most spectacular views of Niagara, and by mere minutes.

If you decide to take a trip to Niagara Falls, be sure to see the falls in the daylight as well as at night. Don’t make the mistake we made and think that the falls are lit up all night long. We now have to take another overnight trip back to Ontario to experience the night lights of Niagara Falls, which actually sounds like fun to me. 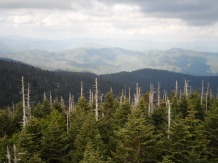